- E-mail to the writer (info@japan-ama.com)

This article was made by Rikako, an Ama diver of Ijika in Toba city, through several personal interviews to know the story of each Ama diver.

When did you start Ama?

It was after I graduated from middle school, so, it was when I was around 15 years old.

But we didn’t start Ama right away, girls did nothing for a year and stayed at home. I technically started Ama since I was 16. My friends and I made a group and went to dive at Niijima island in Tokyo for harvesting Tengusa seaweed during summer. Then, my Ama career started.

The first few years after I became an Ama, I wasn’t yet very serious about my job. I used to hang out with my friends, and if some of us said “Let’s go dive!”, we visited beaches within walking distance and had some fun.

Who did you learn Ama from?

learned Ama from my mother. She taught me where to find abalones, and I carried her belongings when we go and come back from the beach. At that time, we put all the tools and daily catch into a wooden tub and put everything on the head and came back home through a mountain pass.

Sometimes she gave me some of her catch when I couldn’t get a lot, and shared her knowledge of where and how to find abalones with me. I have some diving spots that my mother taught me, but there are some other spots that I found on my own too.

There’s one very good place that my mother taught me. It has a big rock and I could always catch some abalones every time I went there. But recently, surface of the rock becomes bald and there’s no seaweed growing over it.

It is so strange. I can find no abalones in the spot. I am worrying that the sea desertification might has began.

What sorts of jobs have you ever done except for Ama?

Every autumn, for about one month from October, I went to a rice farmer’s house in Ise to help rice harvest. When it’s done, then I moved to Tobishima in Aichi to harvest rice. We could receive money before we went back home, but it was only a few hundreds yen per day, so it didn’t become a lot of money, though.

I worked in construction sometimes, and I did dishwashing at a ryokan at night after I did Ama in the daytime. I also worked at a small factory in Kuzaki. That was a factory to make coils used in machinery, and those coils were all handmade at that time. But they are made by machine these days, right?

When I had some spare time, I made kimono and did some sewing works at home.

You know, I did everything!

Did you dive in winter when you were young?

I didn’t work in winter. When I was young, I stayed at my cousin’s place in Osaka for a month after I finished autumn rice harvest. He was owning a tailor shop, so I made my own dress while I was there. Or I visited my younger brother in Kobe, and we went to see a musical of  Takarazuka Revue. I also went to see a launching ceremony of a foreign ship.

But I had to do household work as well. Going into a mountain to cut trees for firewood, we didn’t have gas at that time, so we used to cook over wood fire everyday. It was really important to gather firewood in winter, so I didn’t go Ama.

When did you start wearing wetsuit to do Ama diving? How did you feel when you wore it for the first time?

I think it was when I gave birth to my second son, so it was 1969. There were actually a few people who wore underpants, which were made by wetsuit cloth, underneath the white cotton outfit before we officially started wearing wetsuit. One day, we were announced that we all start wearing wetsuit. Our neighborhood village Kuzaki decided to allow only one wetsuit per family to prevent from over-fishing. Ijika allowed everyone to have wetsuit, so my family made two wetsuits for my mother-in-law and for me then. It was costly, you know, we had to buy not only wetsuit but also weights, hood, and all necessary items as well. We didn’t have fins then. The first time I wore it, I didn’t feel any cold and that was great. But I was puzzled because my body floats due to the wetsuit flotation, and I didn’t know how much weights I should wear.

I imagine that the amount of catch was dramatically increased when people started wearing wetsuit. How did people react to the circumstance at that time?

Everybody said, “We would take everything from the sea”.

But once you wore it, you cannot take it off. People said, “If it will be all gone, that’s that.”. Coldness was more important.

It was okay without wetsuit in midsummer. But back then, we dived before the new year’s day of the lunar calendar, which means until February. So, the sea water was freezing cold!

You have no energy to seek for sea cucumbers, the only thing you could do was grabbing Mehibi (bottom part of Wakame seaweed) and swimming back. It was too cold and I could not think of working for money.

And it was terrifying, you know. Your body quakes and has no energy. I was really worrying if I could safely come back to the shore, otherwise I might get drowned and die.

When you were pregnant, until when did you dive before you deliver a baby?

I dived just before I gave birth to my baby. We usually don’t go diving about one month after giving birth, but we’ll come back soon after that. About an Ama who’s 4 years older than me, she started labor while she was diving and asked a man on a boat to pick her up and came back to the village right away, and she gave birth within the day. We used to have a midwife in the village.

You love to go Ama. No matter it becomes money or not, you always want to go to the sea. What makes you be like that?

If I go Ama, I can see my friends and it is fun we chat and laugh together. Now we have young members like you. I used to go to the beaches by myself to get some shellfish at low tide, but it’s dangerous and I feel unsafe, so I don’t do that alone but ask somebody to go with.

Well, no matter if it becomes money or not, I just like it. Not only me, but every body will be addicted to Ama. You too, right? There you go.

Comparing the time when you were young and now, how do you see yourself as an Ama? When do you think was the peak of your Ama career?

I think it was 5 years ago, when your husband came to our village for the first time.

There were so many small sea cucumbers in the sea that winter. I can’t forget that I could get 30 kg of sea cucumbers per day. It was the first time in my Ama career, and only had happened during that year. It was so strange.

When the tide started to move, sea cucumbers came out and started dancing like moving their heads upward. Also, during that season, I could really SEE things well in the sea. When the tide was high, the water got so clear and it was super transparent, and I could see everything.

I believe that was the best season in my life as an Ama.

You have three sons. If you have a daughter, do you think you will let her become an Ama?

It depends on what she wants to do, it’s all up to her.

If she says she wants to do Ama, I’ll have no objection. But at that time, every kid went to high school and there was no one who said to become an Ama. Unless her classmates or friends say that they will become Ama, you won’t think of becoming an Ama.

It was natural at that time for kids to find a job after they graduated from high school.

Lastly, please tell us your secret method of your health and long life. 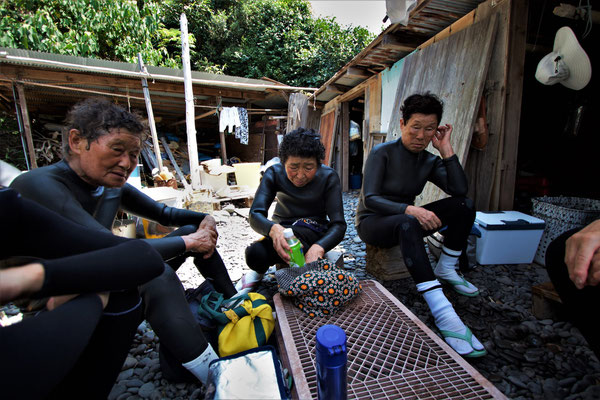 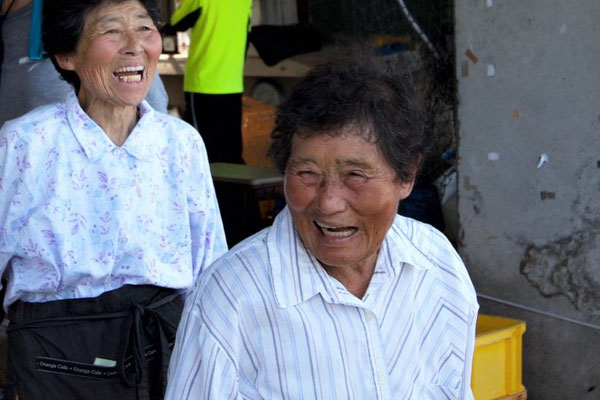 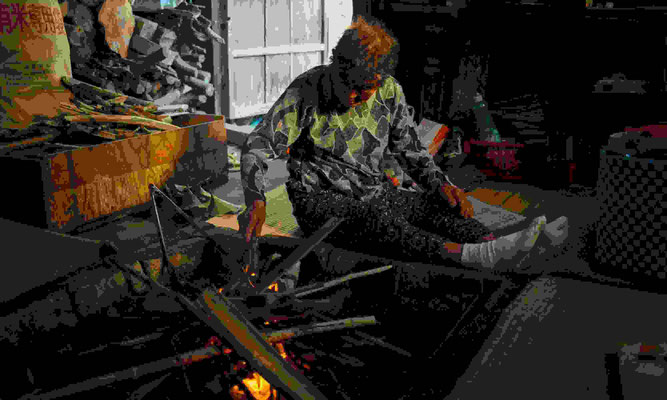